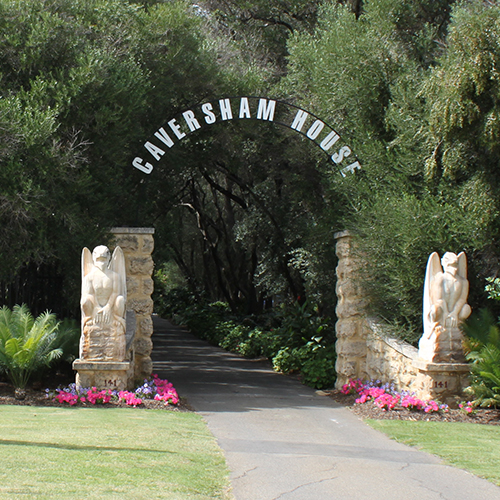 Caversham House was built in 1835. This character home was transformed into the first wedding reception centre in the Swan Valley and has catered for wedding functions ever since the 1960’s. The house has a blend of French and contemporary style refurbishments. including a new bar, large ‘French-Paris’ crystal pendants, provincial doors, well-appointed lounges and pergolas with climbing wisteria. It is one of the most opulent Wedding venues in the Swan Valley.

History of the Estate

When the British government decided to send out Captain James Stirling to find a settlement on the Swan River, it issued circulars designed primarily to encourage would-be settlers to join the venture. The big incentive offered was the allocation of land to approved people, provided they arrived in the colony before the end of the year 1830. The allocations were made based on investment in the project so that those who bought most material wealth, and perhaps staff as well, were allocated the greater acreages. All allocations were subject to certain land improvements, or “location duties” as they were called.

Swan location M1, on which this house stands, consisted of 1452 acres with a river frontage and was allocated to Peter Cayley Shadwell, whose family had a law firm in London and who arrived in the colony in the “Egyptian” on the 13th of February 1830. Shadwell, remained in the colony for only a few months, however, he left agents with funds to draw on and made sure the required improvements were carried out so that on the 4th of January 1835, he was granted the property in fee simple (a copy of this deed is on display in the reception room).

Shadwell’s agents had carried out considerable clearing, had planted crops and gardens and erected some buildings. It appears that Shadwell leased the property early in the 1830’s to Dr. Richard Hinds, a surgeon in the Royal Navy. It also seems that the doctor’s son Charles Pidley Hinds, only a youth, came to the property at a young age and may have helped in carrying out duties.

As soon as Shadwell received his certificate of title, he was entitled to sell his property which he soon did to Dr. Hinds who arrived with his family in the “Shepherd” on the 28th of February 1837. Although it is almost certain the Hinds lived on the property at first, they later moved to Perth where Dr. Hinds died in 1843. It is interesting to note that the property had no name at that stage, which is unusual for those days. Research is incomplete however it does appear almost certain that the Hinds gave the property the name of Caversham Rise after a seat in Berkshire, England and because of its geographical situation at the top of the nearby rise offering comfortable access to and from the river which, of course, was the key medium of transport.

In the late 1870s, Robert de Burgh, who in 1865 had added to his holdings the Heal property of 1123 acres between Caversham Rise and Roes, sold all his estate west of West Swan Road to his son-in-law, Charles Harper of Woodbridge and Henry Brockman of Cheriton, Gingin. In the mid 1890’s the remainder of the estate was subdivided by Henry de Burgh who had succeeded his father on the latter’s death in 1884 and then began the establishment of the vineyards of today. It interesting to note that Robert de Burgh’s grandson, Walter de Burgh, still owns land and lives nearby, thus maintaining a continuous family presence of over 123 years.

Following the subdivision in the 1890s, Caversham House (it appears de Burghs dropped the “rise” from the name) passed to Frederick Slade Brockman (whose wife was Grace Bussell of south-west fame) and B.H. Darbyshire before being sold to Adrian de’Espeissis in 1901.